How much should I pay for land?  As always, it depends.  In the past I’ve mentioned the rising demand for high-quality arable land, a finite resource in an age of infinite growth and consumption that will undoubtedly have an effect on farmland prices.  According to farmland.org, it is estimated that 1/32 of the worlds land mass is arable.  Moreover, much of this area lies in politically or geographically isolated areas.  In Panama, Nicaragua and Guatemala, where I have worked the last few years we have seen tremendous increase in farmland prices.  A recent report estimates farmland in Brazil has quadrupled over the last decade.  On the one hand, at least from a real-estate perspective, the upside could trump concerns about rising purchase and establishment costs, on the other we will face rising costs both as consumers and investors, meaning of course plantation costs, at all levels, will continue to rise.  In Panama we still find properties in the $2000 – $3000 per hectare range, however these are consistently in areas of isolated or difficult access or poor quality broken land.  Viable reforestation farmlands are fetching upwards of $4000, assuming medium to high scale hectareage.  Guatemala, a country with a strong commodity sector has seen a similar rise due to aggressive African Palm, Rubber and Sugar Cane projects.  It is reasonable to assume therefore that, particularly for small and medium scale forest investors, will see a significant drop in scale, due to higher per hectare costs.  One possible alternative is to revisit those cheaper lands..  Specifically, I’m referring to those lands that cost less due to soil and land conditions and will therefore be less appealing to industrial teak and agriculture investors.  Naturally, you can conduct an independent analysis of what exactly might growth on these “poor” quality soils, but it is likely that you will end up with a list of native species, naturally adapted over millenia, to local conditions.  Using hardwoods as an example, you can establish nitrogen-fixing species, to degraded areas and over time restore nutrient cycling and fertility self-reliance.  Pioneer species can also play an important role in degraded lands (I’ll write more on the subject next week).    The issue here is that there is a perception that plantation native species will garner less return within the 22 to 25 year rotation cycle expected of Teak.  Now, while I refute this perception, let us assume it is true simply because that’s what you may encounter.  The question is: do I ignore these cheaper lands, based on “teakability” or do I reanalyze how I might use, and likely improve, these lands?  In other words will I achieve my goals (whether financial, social or environmental) by ignoring degraded or deforested lands? or do I plant something that I know will grow well and in all likelihood produce something valuable?  Its the difference between doing nothing and making a sound investment.  My advice in a nutshell: let your property decide what grows best! 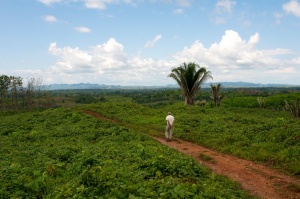 Site characteristics, like soil and topography, will make or break your plantation.