The Ivory Coast has featured prominently in this year’s commodity news with reports of cocoa shipments falling far below levels of previous years. This week, Reuters reported that cocoa port arrivals dropped a dramatic 16% year-on-year since the start of the season last October. A series of recent reports have linked unseasonably dry weather to the sharp decline in grindings and exports. In particular, the Harmattan winds that blow from the Sahara southward across much of West Africa have been unforgiving to this season’s harvest. Industry expectations are for the trend to continue into the next growing season mainly due to low rainfall. Not only have volumes been affected, but quality as well with smaller average bean size and high acidity being reported. As a consequence, exporters have turned away as much as half of arriving volumes. The socioeconomic impact of this damage on the country’s smallholder producers has been extensive.

The Ivorian case is emblematic of supply-side challenges being faced worldwide by the cocoa industry. As the world’s largest producer, what happens in the Ivory Coast will have repercussions felt by chocolate consumers everywhere. This article reviews some of the proximate causes as well as the fundamental driver behind the crisis.

In June, a group of researchers at the International Center for Tropical Agriculture published an article examining the impact of climate change in West Africa’s cocoa belt and the results are cause for dismay. The authors predict both increased precipitation and temperature extremes during the dry season. They identify the forest-savanna transition zone to be the most vulnerable, predicting 87% and 57% drops in suitable growing areas in Nigeria and Ivory Coast, respectively, by 2050.

Although it is difficult to draw a causal link to climate change, farmers in the Ivory Coast recently reported a mass caterpillar invasion that has affected around 17,000 hectares of growing areas. (Link: video). The extent of the damage and the potential spread of the caterpillar have yet to be fully understood.

Another effect of shifting weather has been the conversion of cocoa acreage to informal mining operations as pits are torn directly into cocoa fields to extract gold. In other cases, cocoa farmers are being drawn from parched farms to the mining regions, leaving trees abandoned.

An informal miner on a cleared plot (Source: AFP)

Against this backdrop, ethnic tensions are simmering as thousands of Ivorian refugees return to their homes only to find the farms occupied by newcomers, often from other regions, in the wake of the country’s 2010 civil war. Many settlers include migrants from neighboring countries that have also been subject to a changing climate. The government’s efforts to adjudicate disputes through the issuance of land title have been woefully inadequate; overall, land tenure remains precarious. In such legal limbo, farmers are understandably reluctant to make needed investments in their orchards.

Displacement and the resulting resource conflicts have manifested themselves in widespread squatting across the country’s remaining protected forests. Experts estimate that the Ivory Coast has lost 80% of its forested area since 1960. Forest clearance continues largely unabated and cocoa farming is pervasive on such plots. Experts believe as much as one third of the country’s cocoa may originate from protected areas. 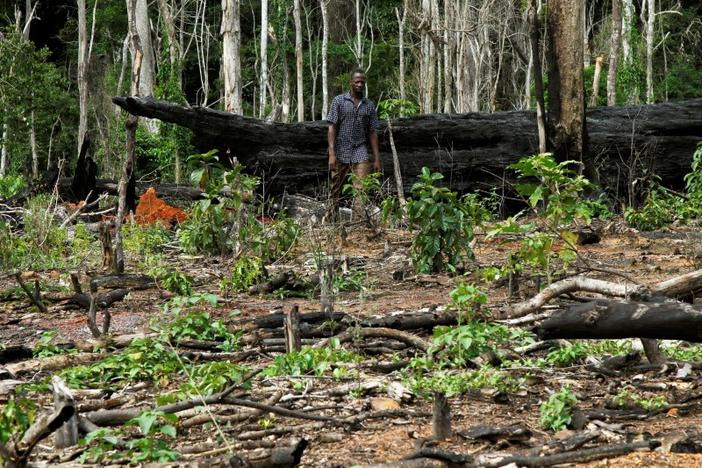 This has pitted human livelihoods against the survival of endangered species, including the pygmy hippopotamus and chimpanzees, endemic to these forests. Taking a more muscular approach, authorities forcibly evicted thousands cocoa farmers from these lands. The removal of over 50,000 people from Mont Peko National Park alone may take 10,000 tons of cocoa off the market in short order and is likely to further inflame tensions. Human rights groups have raised the alarm that the evictions have been linked to the illegal destruction of homes, intimidation, extortion and even murder.

Taken together, these factors paint a picture of long-term secular decline that will not be easily resolved by a year or two of plentiful rainfall. Even more concerning is that these trends are not unique to the Ivory Coast. Recent weather patterns attributed to El Niño have adversely affected production from Brazil to Indonesia. While laudable, private and public sectors efforts to combat the effects of climate change would seem to fall short given the magnitude of the problem.

One of the recommendations posed by the CIAT researchers is the adoption of agroforestry systems: “…in view of the relatively high rainfalls and short dry season in this area, the conditions for managing the projected increase in maximum temperatures through the systematic use of shade are particularly good. Cocoa could be grown here in multi-strata agroforests under a canopy of useful trees creating their own microclimate…” (Source: CIAT) Such systems are effective in buffering temperature extremes, modulating humidity, and reducing erosion caused by heavy rainfall. They are also intensive in their capture of carbon dioxide. While cocoa may be the proverbial canary in the mine, agroforestry systems, including those that produce cocoa, will undoubtedly play a role in any serious response to a changing climate.

Today, the Wall St. Journal published an article entitled “Cocoa Production Could Be Devastated by Climate Change, Experts Warn,” drawing attention to the potential impact of climate change on cocoa production worldwide. Genetic diversity and the development of new varieties drawn from a broader gene pool is cited as an important part of the response:

“To make cocoa crops more resilient, the industry needs a greater long-term focus on genetic diversity, which will allow plants to better withstand and adapt to changes in climate, said  Brigitte Laliberté an expert on cocoa genetic resources at Biodiversity International, a global research-for-development organization. Genetic diversity in the West African region is low, she said, and while a focus on better agricultural methods can help yields in the short term, in the long term there must be better research and funding for breeding more resilient varieties, she said.”

The lack of genetic diversity makes African cocoa inherently more vulnerable to pests and disease that can be spawned by changes in humidity and temperature vis-a-vis Latin America cocoa farms whose natural genetic pool is more diverse. This point certainly underscores the importance of avoiding monoculture around a handful of clonal selections; embracing endemic varieties; and employing agroforestry systems to enhance the species’ natural resilience.

Outcries have mounted over the government’s handling of the Mont Peko evictions with Human Rights Watch issuing a scathing statement:

“International law protects anyone who occupies land from forced evictions that either do not provide adequate notice or do not respect the dignity and rights of those affected, regardless of whether they occupy the land legally.”

Now homeless, thousands of former squatters have been driven into neighboring villages that lack the resources to accommodate them.

Bloomberg reported today that the impending cocoa shortage is likely to worsen over the remainder of the current season and into the next. By one measure (stockpiles-to-grindings), the market is at its tightest in 30 years with cocoa butter in particularly short supply. The head of Olam International’s cocoa division (the company is the world’s 3rd largest processor) stated:

Heading into the peak Halloween and Christmas demand period, it seems likely that the scarcity will be felt by consumers and producers alike.